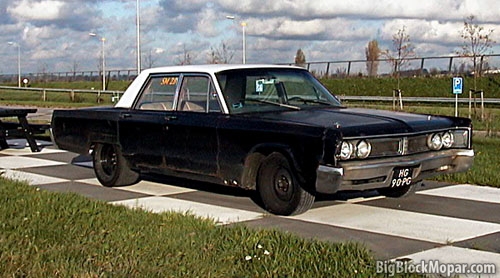 Installed my Thermoquad today. Had too make some ‘trialruns’ ahum, to tune it of course…. 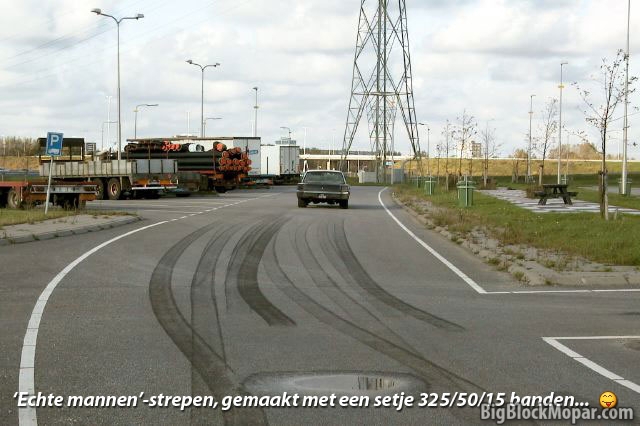 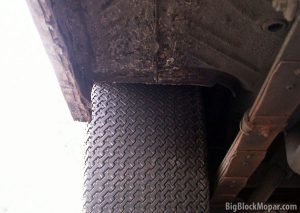 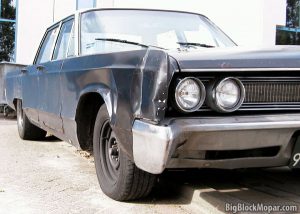 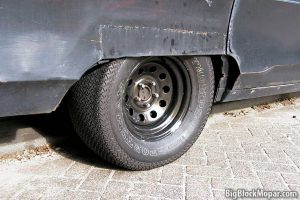 Waiting inline at the Drachten-dragrace… 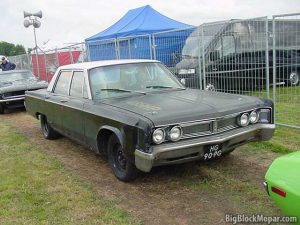 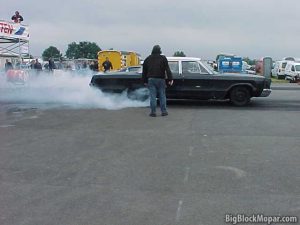 At shot of my car at an earlier race this year…. 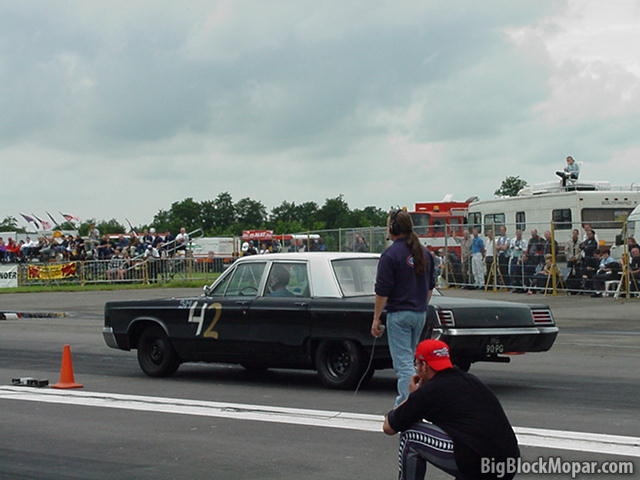 Currently I’m swapping engines again. Last year’s 440 will be back in the engine-bay…. Power will be restored!!! :o)

Here the patient is ready for the heart-transplant…. 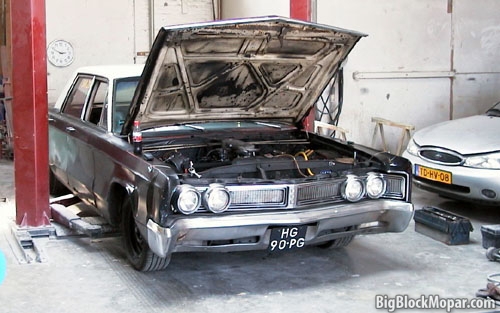 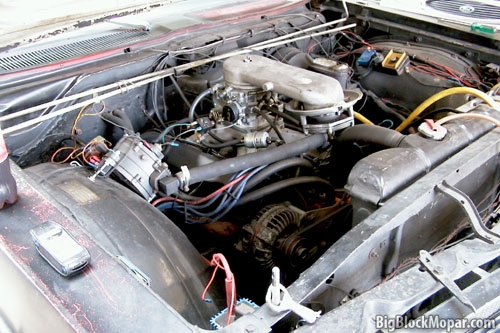 The engine, still with the Propane fuel-system installed. 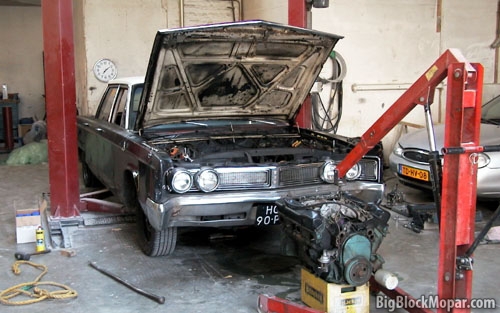 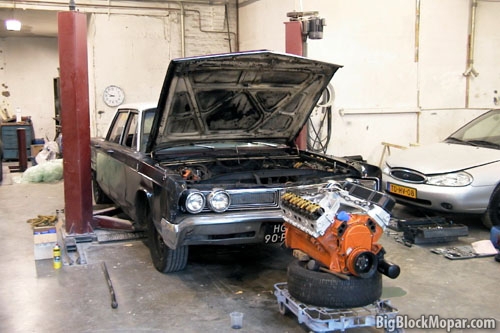 …Here, it’s ‘new’ but ‘been there before’ heart is waiting to get in….

I painted the car myself after I had enough of the red color it had before. It took 6 spraycans to do the whole car. I releaved the tired 383 from it’s duty, and installed a well-used, running 440 in the car.

This engine lasted only a couple of months, as it had worn pistonrings. In that time it had broke the top-pistonrings in 5 cylinders !! After removal of this engine I installed my rebuilt 440, which is shown in the engine section on this site. In the mean time, I had swapped the rearaxle for an Imperial unit, which had SureGrip, but only a 2.91 gearset. First dragrace I did with this car showed a 14.7 on the 1/4 mile. And after I installed the biggest jets I had in the carb, it went 14.2! Still with the 2.91 gears in the back. I bought a set of 3.90 Richmond gears, and installed these in the axle.

The car has ran a best ET of 13.78 on the 1/4 mile as of yet. And this run was made with two worn lobes and lifters in the engine, which I found out later… 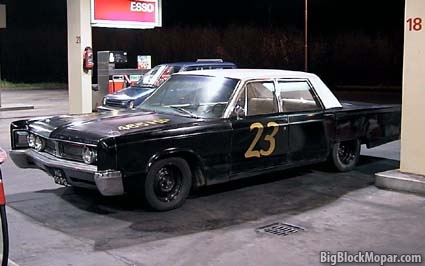 Last year I had this dual carb setup on the 440. It consisted of 2 – 625 Carter carbs with a simultanous throttle linkage. Straight out of their boxes, the carbs didn’t require any adjustment other than idle speed. This combo had great throttle response. With this combo I made the 13.7 run, but only after I stepped up the jets quite a bit in the carbs. 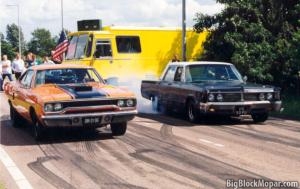 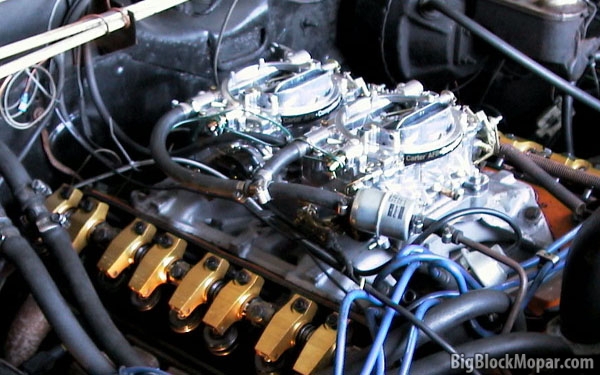 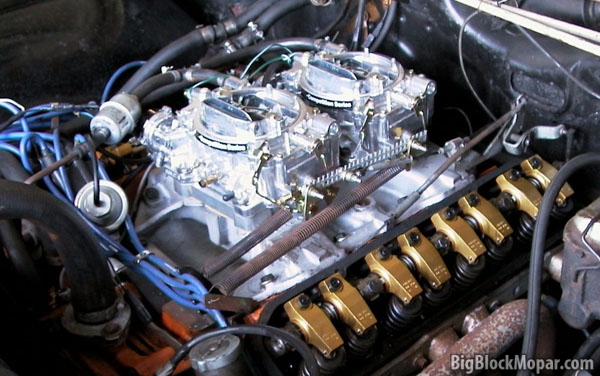 This is how I bought the car….! 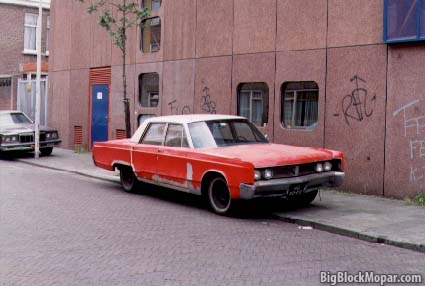 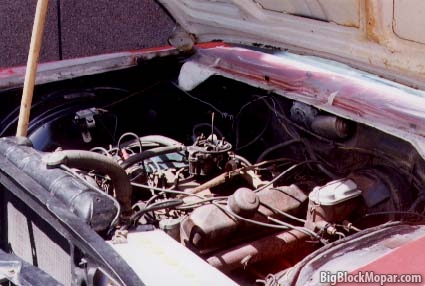 Blah!! An engine-bay without about 15 years of TLC!
Aaahh. That’s a bit better. 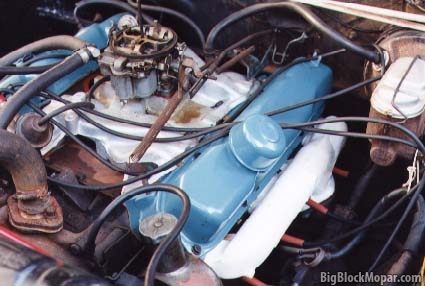 I once wet-sanded my car (on the street!!) because I thought I would paint it soon.
How wrong I was…. Five years later I still hadn’t painted the car.. :o/ 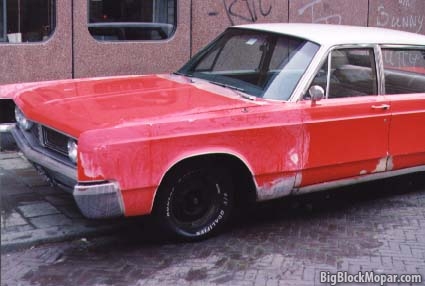